Recently, I read the essay "Without Saints" by Flat Caps and Fatalism (FCF), where he talks about being raised Catholic, but somehow growing up without any notion of what it really meant to have Christian faith. He writes:

"When I was fourteen, I asked a girl I knew ‘do you really believe all that stuff?’ about, in essence, the whole of Christianity. I’m just one person, and not a particularly important one, but perhaps this incident contains something of interest when trying to understand secularisation in our era.

"When I asked the girl if she really believed in ‘all that stuff’, it wasn’t an attack; and she didn’t seem to take it as one. She didn’t become defensive. Instead, she very simply, but with a hint of pride, answered ‘yes’. This didn’t lead to any great theological debate. I took her at her word.

"Don’t be too fast to understand this incident. I wasn’t angry at Christianity, and I wasn’t exactly outside it either. Like the girl, I was raised Catholic. I went to Mass every week. I went to Catholic schools. I took the sacraments. I knew priests and respected them. I had no inkling of the abuse scandals that would come to light in the following years. Everyone in my family was Catholic; and, as far as I know, it had been that way since Western Europe was first converted.

FCF  discusses this question and possible answers for a few paragraphs, then comes upon a possible reason for his, and others', disconnection from faith: He wasn't taught about the saints, nor did he ever encounter one.

"The loss of the saints was, I suspect, central. When I think back to my Catholic education, I didn’t learn much about them. When I was very little, there were stories of Saint Francis preaching to the birds, but by the time I was a teenager there was nothing at all. If children learn more by example than by doctrine, this matters. It is hard to be good in a way that transcends mere humaneness, so few of us will know someone who can serve as a clear example. The saints close this gap. The stories of their lives are stories of ordinary people who were extraordinary in their response to something beyond the merely human. Maybe I was puzzled that a smart girl would believe ‘all that stuff’ because I didn’t know those stories and had nothing else that could bridge the gap between doctrine and a person like me." FCF. June 2nd (July 15th, 2022)

I was intrigued by FCF's story because, as I commented:

...Thinking about my youth, I sort of had the opposite experience. (I have only recently started thinking about it this way, so I could be missing a lot.) My family never went to any church (there’s a whole other story there, everything is complicated!) but I grew up reading (and enjoying) Bible stories and I read about saints, mostly coincidentally. Nobody told me to, but there were always tons of books in the house and one of them happened to be stories from British history and talked about several medieval saints. I read them as stories (maybe with some added awe as they were “true” but no more). But they certainly made an impression, especially the story of the poet Caedmon. And years later, in university, I encountered the story of Caedmon again, reading it (awkwardly) in Old English. And it was an encounter that cracked me open and tuned out to be central to who I am becoming….(that’s another story, and I don’t know how it ends…)

Now looking back (more than twenty years later!) I think….I encountered saints and had NO IDEA what to do about it. Ha. I mean, I didn’t do nothing: I turned my fascination with Caedmon and Hild into a big project and I enjoyed it and learned a lot, but I felt I had to make my interest “respectable” to my professors and peers by presenting it as purely academic. It was that, but it was never only that, but I didn’t have the language to express the things I felt, not even to myself. Also one of the weird things about university is you can study a story from a religious context without any personal faith and perhaps even without any respect for the worldview it came from. I just accepted this back then but now I find it very weird and unmoored from reality. How could I have expected to learn from the story of a saint without the understanding or accepting something of what that story meant to the people who told it? SA, July 27th

I am thinking about saints today because my copy of the graphic novel God's Dog arrived (Jonathan Pageau, Mathieu Pageau, Cord Neilson). 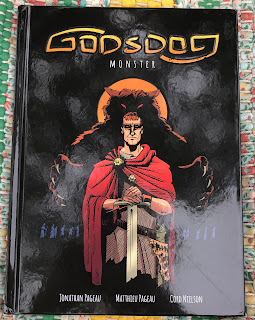 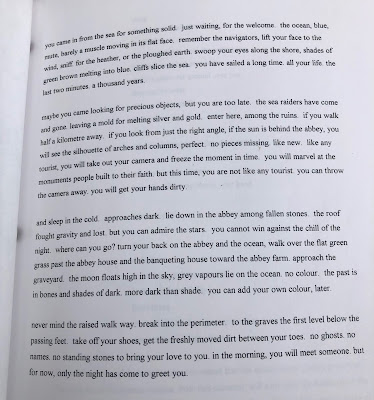 I have kept some of the email correspondence with my academic advisors (i.e. professors). Our emails are professional and wooden and lack enthusiasm. Not so the emails and letters from my friend Nate, who responded passionately and intuitively to my creative process and had a talent for saying just the right encouraging thing. He worried about saying too much but praised the "shamanic" aspects of my writing. Regardless of that, Nate understood that A Gift of Bones was about so much more than references and interpretations and "creative writing."

[Síochána], I will say something that is true but is not a prophecy. It is just true. Soon, your life will change in ways you cannot even imagine.
These changes will blast and recreate your entire being. Is that bad? Of course not. Change is just change. It could be good; it could be wonderful, it could be magical. But it will come. Soon.
You DO NOT need to choose between "your gift" and anything or anyone. You can have anything...AND  your gift too.
You can work with whatever you wish; you can emply yourself in any endeavour, any job, any career.  You can fall in love, move anywhere, have children, push baby carriages through the snow or surfboard with infants on any wave on any ocean in the universe. What does that matter?
What matters is that you hold on to your gift. All that matters is whatever you do - wherever you are - whoever you become as you grow and change - you HOLD onto your gift. Respect your gift. Listen. Listen to your voices, trust you deepest heart.
The more difficult it is, the truer it is.

"Kayley," the awkward young archeologist who unearths Caedmon and his contemporaries: 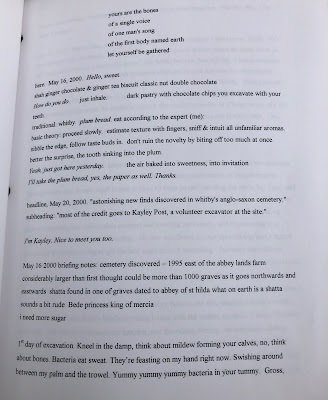 Hild, and her now-deceased husband, Ecgfrith, are introduced in an alternating sequence of imitation Anglo-Saxon verse and Hild's letters to her sister, Hereswith. 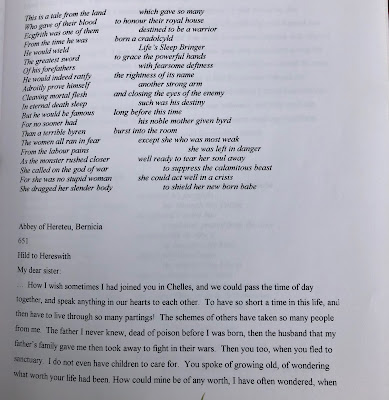 Caerwyn is a native poet, fallen in stature, who tells Caedmon about lost poetic traditions: 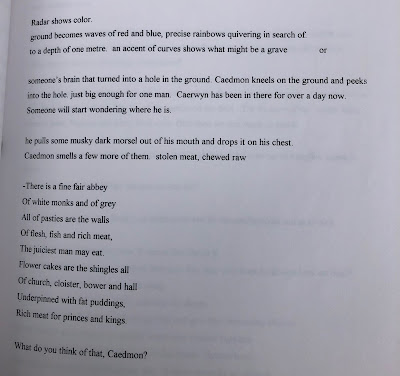 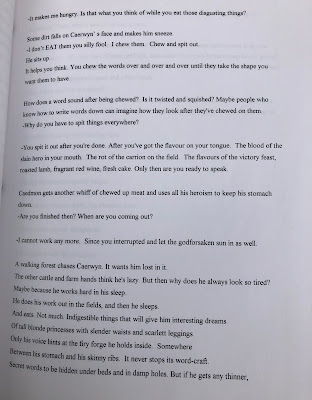 Caedmon gets the spotlight toward the end. 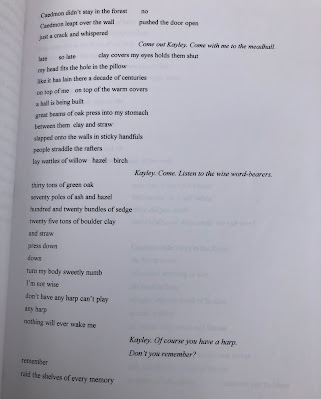 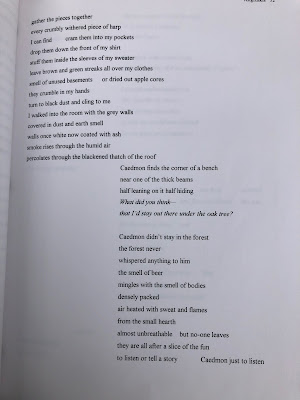 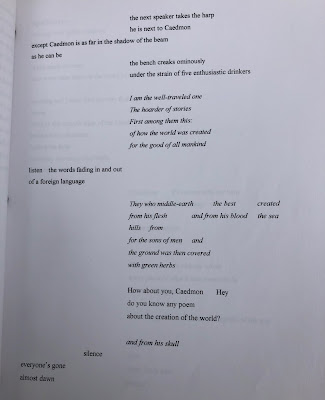 Would I ever try to rewrite A Gift of Bones? Maybe. Seeing God's Dog, and reading the words of others who appear to be on a similar quest to me, makes me wonder. It would be quite different, of course. And it's not immediately obvious to me how I "show" something to others that I feel on such a intuitive level. I feel like there are languages I need to learn to speak. And I don't know if it's more expertise I need, or more humility, more willingness to be the beginner. I find the words of my 22 year old self  “cringey" in part because I was often trying so hard to sound like I knew what I was talking about. Do I know what I'm talking about, or where I’m going, even now?
I doubt it, and yet I feel like the path is not altogether dark, either.  Nor silent and empty of other travellers. But more than ever now, I need those other travellers to speak up. Don’t be shy, don’t be afraid of sounding like a fool! Who are we and what are we doing here?
Sing me something.
at August 15, 2022

torthúil explores is my journal of sense-making. It is a trail of breadcrumbs that I leave as I venture into the unknown: reading, talking, listening, thinking, living. It is not my goal to judge people, whom I assume (until proven otherwise) are on a similar journey to find meaning and understanding. I do judge ideas, as fairly and thoughtfully as I am capable of. Anything I write here is open to discussion and commentary, as long as you approach it in a similar spirit of curiosity, openness and joy.

torthúil
Mother, teacher, dancer, wife, friend, musician, reader, thinker....and a few other hats I might not have tried on yet or not worn in a while. Writing new life into existence.